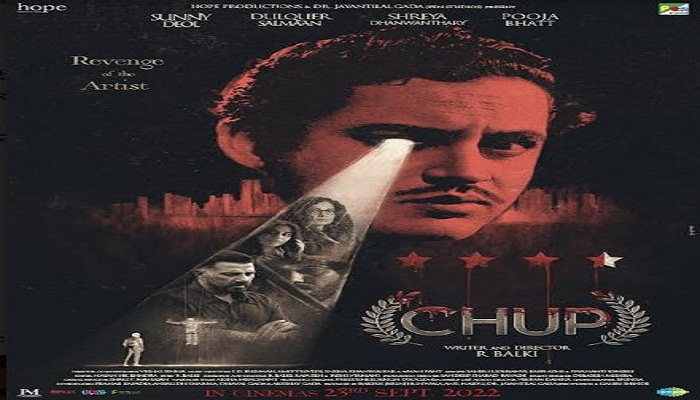 After launching the impressive teaser of R Balki’s ‘Chup’, the makers of the romantic psycho thriller will be launching the trailer of the highly-anticipated movie on 5th September, 2022.

Interestingly, the makers have consciously decided to reveal intriguing motion posters of ‘Chup’ (from 1st September onwards) on the social media, as an exciting countdown till the trailer launch.

The teaser of R Balki’s ‘Chup’ featuring Sunny Deol, Dulquer Salmaan and Pooja Bhatt has piqued everyone’s curiosity and already built huge anticipation around the film wondering what’s it all about.

While R Balki is not only known to be one of the finest storytellers of Bollywood, he has also explored unconventional themes successfully in mainstream cinema and considering the encouraging response to the teaser of ‘Chup’, the trailer is eagerly awaited.

Dr. Jayantilal Gada (Pen Studios) presents the film and all India distribution is by Pen Marudhar. The Director of Photography is done by Vishal Sinha and music composers are S D Burman, Amit Trivedi, Sneha Khanwalkar and Aman Pant. The songs are penned by Sahir Ludhianvi, Kaifi Azmi, Swanand Kirkire. Pranab Kapadia and Anirudh Sharma are the co-producers of the film.

AYUSH Minister urges scientists to do research on more than 1,700 medicinal plant species found in Assam