For the first time in the history of major ports, Ship-to-Ship operation of LPG undertaken at Syama Prasad Mookerjee Port 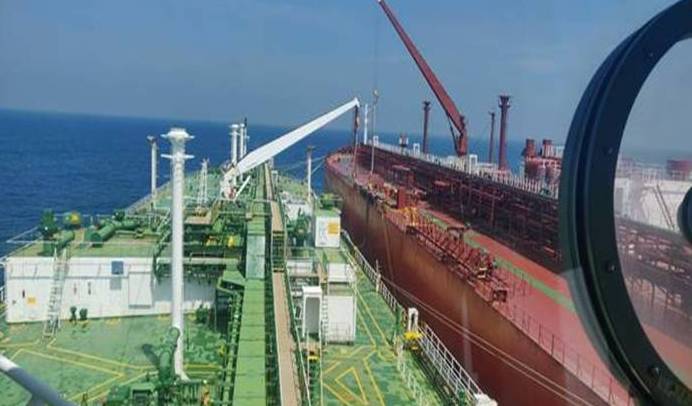 The restricted draft in the river channel necessitates offloading of part cargo at neighbouring ports before calling at Haldia Dock Complex (HDC) or Kolkata Dock System (KDS) of Sysma Prasad Mookerjee Port Kolkata (erstwhile Kolkata Port Trust). Consequent to two port discharge, vessels incur dead freight and additional steaming time. To obviate the inherent channel constraints, SMP Kolkata has endeavoured to open up opportunity for importers to bring in Cape Size or Baby Cape vessels at the deep drafted anchorages located at Sagar, Sandheads and X Point and enable handling of fully laden dry bulk vessels through deployment of Floating Cranes or ship cranes. Over the years good number of dry bulk vessels have been handled at the lighterage points.

Due to the strategically advantageous location, HDC has witnessed incremental demand from trade in terms of catering to LPG, imported POL products and other liquid cargo.

The gradual increase in the volumes of LPG imports at HDC is placed below:

Quantity of LPG imports at HDC in MT :

Several discussions with the senior management of the Oil Manufacturing Companies like BPCL, IOCL, HPCL and other leading private importers of LPG and other liquid products pointed to the intrinsic benefits that can be harnessed through extending the facility of Ship–to-Ship Transfer (STS) of LPG/ Liquid Cargo at the Deep drafted anchorage points of SMP, Kolkata. The Single Port Handling would not only enable to overcome draft restriction at Haldia thereby negating dead freight but also help in mobilization of more cargo thereby reducing unit costs.

HDC, SMP, Kolkata took a pioneering initiative to explore STS Operations of LPG within its limits to handle fully laden vessels and requested Customs Authorities to allow such operations. Matter was pursued with Customs and they kindly considered the request and issued necessary permission on 26.04.2021 allowing such STS Operations. Further, to promote lighterage operations in general, SMP Kolkata extended substantial discount in terms of vessel and cargo related charges and an additional concession towards Tug Hire Charges was extended by the port specifically for STS Operation at Sandheads.

As a result of this pioneering initiative, the first ever STS Operations of LPG in Indian Coast was undertaken by BPCL on 15th October, 2021. BPCL engaged service provider M/s Fendercare Marine to render the services at the offshore STS location.

M/s. Fendercare Marine Omega, a renowned company in STS operation of Liquid Cargo is providing the logistics support. Tug for berthing the vessel at STS site and towing/placing of large size Yokohama fenders is being provided by SMP Kolkata.

The STS Operation for BPCL was earlier done at Male and by doing STS Operation at HDC, BPCL will save valuable foreign exchange. This Operation at HDC reduces the time taken for a daughter vessel by 7-9 days from BPCL’s other location for STS operations which consequently entailing savings of around US $ 3,50,000 per voyage on account of BPCL.

The instant STS operations is expected to open new business potential not only for the country’s oldest riverine Major Port but also benefit the trade and country as a whole in terms of saving substantial foreign exchange. Thus the STS operation at SMP, Kolkata is likely to emerge as a game changer in the overall economics in handling of imported LPG in the Indian Coast.

Mukhtar Abbas Naqvi has said, ensuring happiness in eyes and prosperity in life of every needy is the “Modi Mission”

To consolidate and synergize the plastic processing industry Government is setting up Plastic Parks with state-of-the-art infrastructure: Gowda