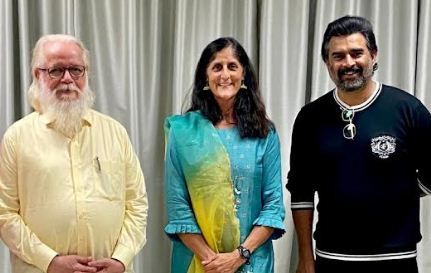 After taking over Cannes Film Festival at the prestigious Palais des Festivals, R Madhavan’s directorial debut Rocketry: The Nambi Effect has reached the US for a 12-day promotional tour. Based on the life of the ISRO genius Nambi Narayanan, this biographical drama has already piqued the interest of fans, critics and the industry alike. Recently, while R Madhavan and Nambi Narayanan were promoting the film in Stafford, Texas, the city declared that 3rd June will be celebrated as Nambi Narayanan Day. Not only that, the ISRO scientist was seen in conversation with astronaut Sunita Williams too.

The 12-day tour in the US will see R Madhavan travelling to locations like New York, Chicago, Houston, Dallas, Arizona, Los Angeles, San Francisco and Seattle, along with the ISRO genius Nambi Narayanan.

Set to hit screens worldwide on 1st July, Rocketry: The Nambi Effect captures the spy scandal that changed Nambi Narayanan’s life forever and unravels the truth behind it all. Starring R Madhavan in the eponymous role, the film has a powerful ensemble star cast comprising of acclaimed international actors like Phyllis Logan, Vincent Riotta and Ron Donachie and with special appearances by superstars Shah Rukh Khan and Suriya.  Staged on a mammoth scale, the film has been shot in India, France, Canada, Georgia and Serbia. The film will be released in six languages worldwide, including Hindi, English, Tamil, Telugu, Malayalam and Kannada.

Rocketry: The Nambi Effect is produced by TriColour films, Varghese Moolan Pictures and 27th Investments. The film is being distributed by UFO Moviez and Red Giant Movies in India and will be distributed internationally by Yash Raj Films and Phars Film Co.