Ministry of Power, in association with Bureau of Energy Efficiency (BEE), organised the 30th National Energy Conservation Awards (NECA) function. Shri R. K. Singh, Minister of State (IC) for Power and New & Renewable Energy and Minister of State for Skill Development & Entrepreneurship was the chief guest on this occasion. This year, due to the COVID pandemic, the function was organised as a Hybrid event transmitted from VigyanBhawan. Stakeholders from across the country and the Awardees participated through virtual platform. The event included a virtual exhibition on achievements on Energy Efficiency. The awards were presented to the winners from different industries and sector establishments. During the event, the Standards and Labelling Programme for Air Compressors and Ultra High Definition (UHD) TV on voluntary basis was initiated; SAATHEE (State-wise Actions on Annual Targets and Headways on Energy Efficiency) – A portal for State Designated Agency for state level activities was also launched. 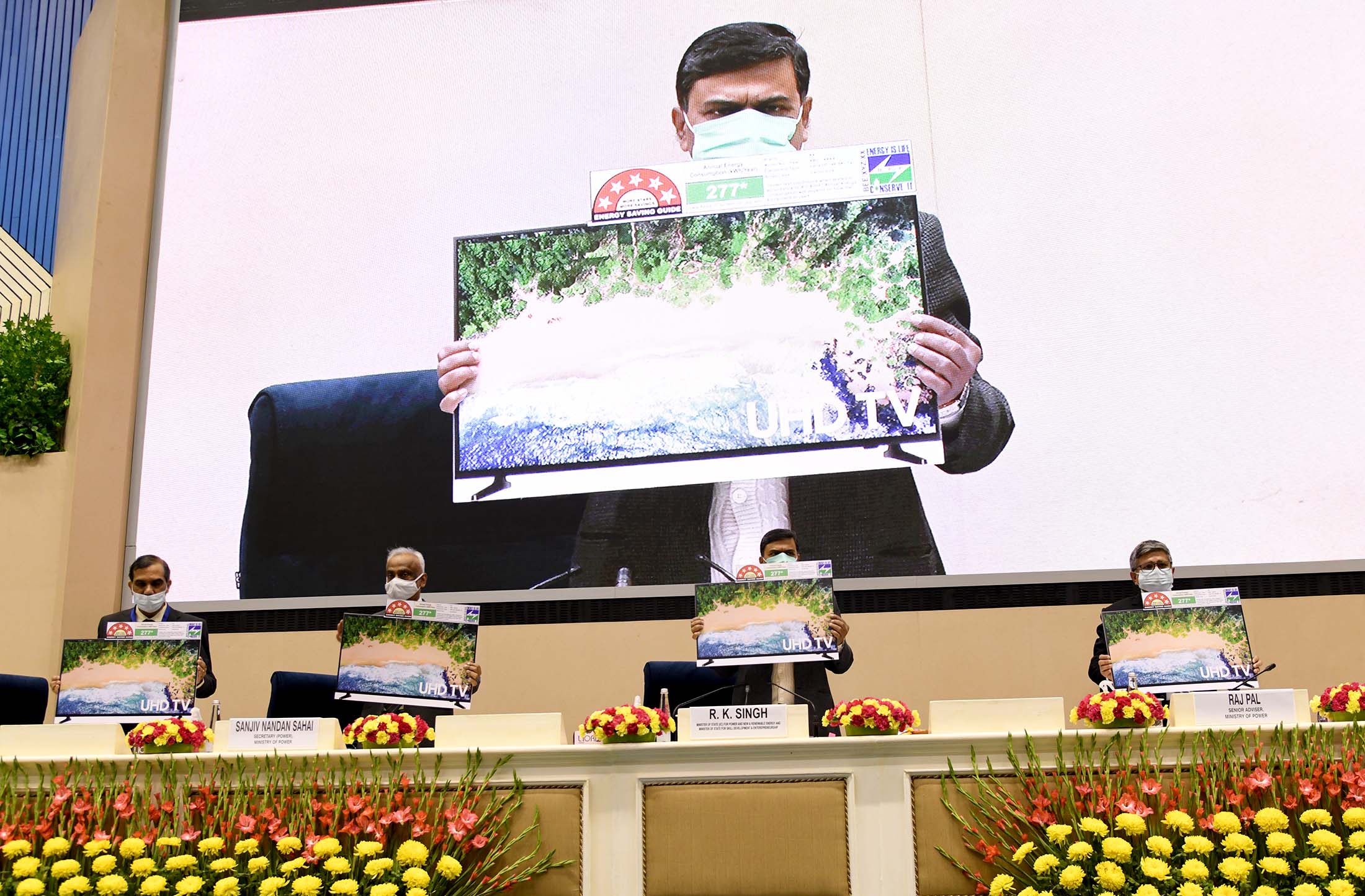 Shri R. K. Singh congratulated the winners and stated that together we have bravely handled the tough times during the pandemic. The power sector continued to function through-out the lockdown period. Energy Efficiency is not only good for the world but also for companies and industries themselves. Our country has one of the lowest per capita emission and per capita energy consumption.Despite this the country has made ambitious commitments to meet the global challenge posed by climate change. Our country has target to reduce the emission intensity to 33-35% by 2030 compared to 2005 level, as part of commitments made during COP 21.Prime Minister’s vision aims at climate mitigation goal, with target for renewable energy capacity to be increased to 450 GW by 2030. While emphasising the importance of energy efficiency he highlighted the Perform, Achieve and Trade (PAT) scheme being implemented by BEE, as a “flag bearer”, as the scheme has not only demonstrated its promise in the country but also has found interest among many other countries. He specifically mentioned the impact of PAT Cycle II achieved emission reduction of 61 million ton of CO2.

We should be alert and prepared for such pandemics in future. The situation brought a huge challenge for our economy. The Minister desired that a system of ranking of states can be developed on the basis of Energy Efficiency and resource conservation. He also added that the states can prepare broad commitments to meet climate goals inline with the NDCs. In conclusion he called up-on to strive for being energy efficient on individual and corporate level without expecting from others.

Shri SanjivNandanSahai, IAS, Secretary (Power) congratulated the winners at the occasion and thanked all the industry players and colleagues for putting their efforts towards energy conservation. The NECA event witnessed award presentations to 57 units from various sectors. This year, it is reported that 409 units have participated in NECA 2020 and collectively achieved saving of 3,007 Million units and substantial thermal energy savings resulting in Rs. 1,503 crores. The MoP has undertaken a lot of pilot projects for energy intensive MSME sectors to enhance their performance and drawing sectoral policy roadmap for MSMEs. Agriculture is the next important sector to focus on energy efficiency. Energy efficiency is a national cause and hence we all should join our hands to make India an energy efficient country.

The virtual event was organised with an aim to promote energy conservation among all the sectors of economy, followed by an award distribution ceremony for the industrial units& other establishments to encourage more actions in achieving efficient utilization of energy sources. The dignitaries and delegates could also visit a virtual exhibition on various initiatives for energy efficiency and their current progress highlighting major contribution to country’s energy security.

BEE has developed a Management Information System (MIS) portal namely State-wise Actions on Annual Targets and Headways on Energy Efficiency (SAATHEE) which will facilitate real-time monitoring of the progress of implementation of various Energy Conservation endeavours at State level.

BEE is a statutory body under Ministry of Power which is mandated to implement policy and programmes in energy efficiency and conservation. The objective of such initiatives is to reduce energy intensity in our country by optimizing energy demand and reduce emissions of greenhouse gases (GHG) which are responsible for global warming and climate change.

New initiatives have been taken this year to involve the youth in fulfilling the vision of Ek Bharat, Shreshtha Bharat: Kiren Rijiju