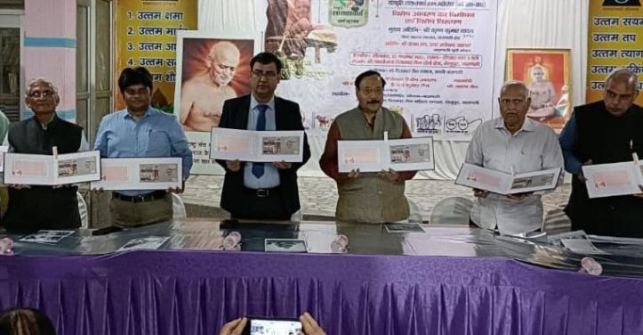 Varanasi has been an ancient city of spirituality and culture. The land here has nourished and flourished various religions and their rich heritage. It has been the birthplace of 4 Tirthankaras of Jainism, Suparshvanath, Chandra Prabhu, Shreyans Nath and Parshvanath. Department of Posts has also enriched Jain culture from time to time by issuing Stamps and Special Covers related to Jainism. Mr. Krishna Kumar Yadav, Postmaster General of Varanasi Region, expressed the above words while releasing a Special Cover and Cancellation on the Sanskriti Shasanacharya Golden Jubilee of of Vidyasagar Ji Maharaj.

Postmaster General Mr. Krishna Kumar Yadav said that Vidyasagar ji Maharaj is not only a great scholar of various languages and subjects, but the work done by him in the field of social service and service to the nation is also inspiring. In such a situation, the Indian Postal Department released a Special Cover and Cancellation highlighting his merits to commemorate the Sanskriti Shasanacharya Golden Jubilee of Sant Shiromani Shri Vidyasagar Ji Mahamuniraj. This special cover will not only be a collectable for philatelists in the country and abroad, but through this the fame of this Golden Jubilee Celebration will reach abroad as well.

Highlighting the words written on Special Cover, Postmaster General Mr. Krishna Kumar Yadav said that, Acharya Shri Vidyasagar Ji Maharaj, the author of many texts including the epic Paramshradheya Antaryatri, Mookmati, the litterateur of languages like Hindi, Sanskrit, Prakrit, the spiritual guide of many seekers, motivator of cowsheds, influencer of 5 Girls Gurukul Pratibhasthali, motivator of non-violent handloom to youths of the country, motivator of handloom in jails, motivator of Bhagyoday Teerth (hospital), motivator of Poornayu Ayurveda Hospital and Research Vidyapeeth, motivator of several pilgrimages, motivator of several national heroes. In such a situation, the youth will also be encouraged by this Special Cover on him by the Postal Department.

In the program, the guest of honour, Senior Superintendent of Post Offices Rajan Rao told that the price of the said special cover has been kept at ₹ 25 including postage stamp. It can be purchased from Philatelic Bureau Varanasi Head Post Office.

The sponsor of the special cover, Vijay Kumar Jain said that this initiative of the Postal Department will increase the promotion of Jain culture.

Democracy in India is not just a collection of streams of constitution, it is our life-stream: PM