A team of 6 members from the National Jal Jeevan Mission (NJJM) is visiting Andhra Pradesh during 2 – 5December, 2020 to provide technical assistance to the State to realize the goal of ‘Har Ghar Jal’ under the flagship programme, Jal Jeevan Mission as well as identify different issues and challenges and to document good practices. The team is visiting different parts of the State and interacting with field-level officials involved with the implementation of water supply schemes as well as Gram Pradhans and members of Gram Panchayats. The team is also holding meetings with the Chairperson of District Water& Sanitation Mission/District Collector to brief them about the progress and seek their intervention for speedy implementation of the programme.

Government of Andhra Pradesh has planned to provide functional tap water (FHTC) to all rural households of the State by 2023-24. Out of 95.66 lakh rural households in the State, till now 34.94 lakh households have been provided with tap water connections and plans are afoot to cover the remaining houses. The 6-member team covered 9 districts viz. Vishakhapatnam, Krishna, Chittoor, Srikakulam, Vizianagram, West Godavari, Kadapa, Anantpurand Kurnool. Different villages/ habitations were selected randomly to see the progress of the mission works. The team visited Kothavalasa block of Vizianagaram district where the discussions were held with people and VWSC comprising of five women members. In Palletummalapalem village, tap water connections were provided during the 100-daycampaign at Panchayat Bhawan and schools in Krishna district. In the village, there is an overhead tank with sump and slow sand filter arrangement to supply water.

The team also visited Raghavampalli village, Mustur Gram Panchayat in Anatpur district. The village has 282 households, out of which 149 households have functional household tap connection. Similarly, households in Mopidevi village in Krishna district are getting assured water supply. Vaddemanu village in Nandikotur block of Kurnool district has 100% tap water connections. Household tap water connections were provided in the village even inhabitation which had hard rock. 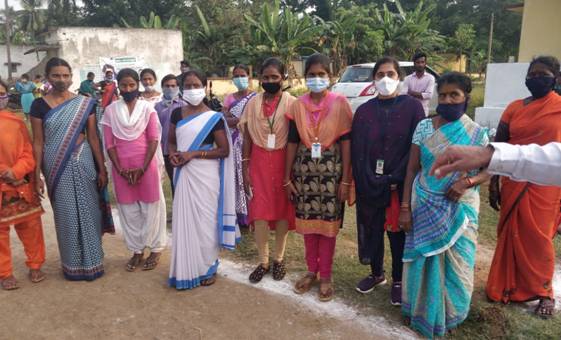 NJJM team also visited Ambativalasa habitation of Reemapeta Gram Panchayat in Vizianagaram district whereall households have been provided tap water connections in May, 2020. VWSC has been formed here with 50% women participation. R. Lilawatamma an old lady residing in the village said, “At my age, it is very difficult to carry water from the Public Stand Post every day. But with the facility of tap connection in the house, I now feel relieved. At least in old age, I will not be forced to carry heavy buckets. It makes me happy to see the water flow.”

A silent revolution is happening in these villages, where Government’s vision of providing basic amenities, thereby improving the lives of people, and enhancing ease of living is getting fulfilled as well as realizing the aspirations of the people.

Union Minister of Education addresses at the 34th Convocation of IGNOU