Doda District to be promoted as a Hub of Winter games in coming days: Dr Jitendra Singh 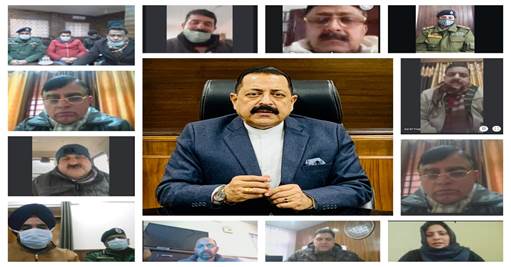 Dr Jitendra Singh enquired about the availability and functioning of Dashboard in districts for real time updates and also issued fresh instructions to deal with the surge in cases. District Collectors, SSPs, DDC Chairman of Kathua, Udhampur, Doda, Reasi, Kishtwar, and Ramban joined the review meeting along with other district officials.

The Minister was informed that most of the positive cases in the third wave have remained asymptomatic or mildly symptomatic with flu-like symptoms which lasts for 4 to 5 days and then dissipates. The Minister, however, underlined that there is no room for complacency and all COVID norms and protocols must be followed in the strictest possible manner. He also lauded the efforts of DCs for completing the vaccination process in his Parliamentary Constituency, barring a few far-flung pockets in districts like Kishtwar.

Dr Jitendra Singh today also received an update about the “Sansad Khel Spardha” programme or the Parliamentary Sports Competition Programme in his constituency to promote sports, sports talent and also identify young budding as well as hidden talents in village, Panchayat, Block and District level. The Minister said that sports competition will be organised in coming days at Panchayat, Block and the Constituency level as a whole to tap hidden talents in sporting activities like archery, wrestling, boxing, badminton, table tennis, athletics, cycling, and swimming and in games like hockey, football, volleyball and cricket.

Dr Jitendra Singh announced the formation of Steering Committee comprising all the DCs, SSPs, DDC Chairpersons and District Sports officials to organise Indoor and Outdoor competitions for boys and girls under 17 Years and identify the sporting talent to catch them young. He said, the budding stars in the individual category will be provided an opportunity to get the best of the training facilities at National Sports Coaching Institutes and Academies. He also asked DCs to nominate Sports Ambassadors for each District.

Dr Jitendra Singh said, Prime Minister Narendra Modi has launched several Flagship Schemes in the country to promote and encourage sports in India. He said, PM Modi is himself an epitome of fitness and someone who leads by example and suggests fellow citizens to adopt a healthy lifestyle.

Dr Jitendra Singh also asked the DCs to come out with a niche sporting event for each district to build brand and promote the same with the help of corporate sector, local influencers and civil society. He, for example, pointed out that Winter Sports and Archery can be popularised in Doda, while Wrestling and Cycling are popular sporting activities in Reasi.

The Minister also expressed his desire to promote Doda District as a Hub of Winter games in coming days, which will also give a fillip to tourism.

PM pays homage to Shri Balasaheb Thackeray on his Jayanti