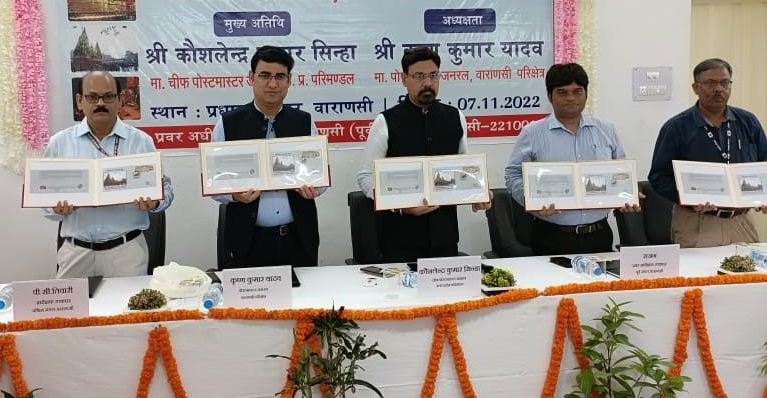 On this occasion, Chief Postmaster General Shri Kaushlendra Kumar Sinha said that Dev Deepawali of Varanasi has gone from local to global, while the grand corridor and rejuvenated Shri Kashi Vishwanath Dham has attracted everyone. The beauty of the Ganga Aarti that takes place on Ganges Ghats is worth to sight. Release of special covers and special cancellations on all of these is a moment of pride for all the devotees and residents of Kashi. With this, the culture, tradition and heritage of Varanasi will be promoted even faster in the country and abroad and more & more people will be able to get information about it.

Shri Sinha said that through the stamps and various special covers, Department of Posts is disseminating the various dimensions related to the country across the world. In Uttar Pradesh, younger generation has been get linked to his legacy by issuing various special covers on One District-One Product, GI Products, Azadi ka Amrit Mahotsav, Har Ghar Tiranga, Shri Ram Van Gaman Path, Buddha Circuit and Unsung Heroes and Sheroes of Indian Freedom Struggle. Many innovative initiatives like My Stamp, Philately Deposit Account, Dhai Akhar Letter Writing Competition, Stamp Designing and Deen Dayal SPARSH Scholarship Scheme have been taken to connect youths with stamps and letter writing.

Postmaster General, Shri Krishna Kumar Yadav said that significance of Shri Kashi Vishwanath Dham, Dev Deepawali and the tradition of Aarti at Ganga Ghats are associated with different periods of history. Dev Deepawali is not just a festival, but it is a festival to illuminate oneself along with lighting of lamps in the closeness of nature. As such, these special covers released on the auspicious day of Dev Deepawali will illuminate the celebratory tradition of Kashi, spiritual culture, spirit of devotion towards adorable gods and goddesses all over the world. Shri Yadav said that in the special cover released, attractive images of Dev Deepawali, Ganga Aarti and the grand & rejuvenated Shri Kashi Vishwanath Dham are visible and bilingual information about them is printed on the back of the cover in Hindi & English. All these special covers can be obtained from the Varanasi Head Post Office located at Visheshwarganj.